Bill's first run with the Wolverines was in the summer of 1986 when he attended the Onion Run in Traverse City. It was his first and last Onion Run as the event was not a good match for him, but the Wolverines felt like family from the time he met them.  When Bill and Nancy returned to Michigan in 1987 with their son, David, after settling in they attended a club meeting and applied for membership. Bill was interested in anything four-wheel drive and did the Jeep Cup rallies in the late 80s along with attending his first Smoky Mountain Trek in the spring of 87 with Rick B. His excitement must have been contagious as for the next couple of years more and more Wolverines made the Trek down to Tennessee. Bill even got to split the hard luck award with fellow member Art S. in 1991 when he snapped the frame in his CJ5. In 1999 the Smoky Mountain Trek celebrated it's 25th year. A couple years late it became the Smoky Mountain Venture and was still well attended by our club.  Bill attended the 2002 event which was his 15th and their last year putting it on,

​Bill, Nancy, David and Michelle over the years introduced the club to other "new" areas including Drummond Island Michigan, Ouray Colorado, Wind Rock Park in Tennessee and more recently Royal Blue in Tennessee. As a family they attended a couple of Jeep jamborees and Bill was a trail leader for the Jamboree that was held in Cadillac Michigan (many years ago). Bill's love for the mountains and rocks took him to Wind Rock Park in Oliver Springs in 2005. It was his replacement for the Smokies. In 2006 Bill invited the whole club to stay at his parent's house and to go wheeling with him to Wind Rock. Since then, Bill & Nancy have moved to Tennessee where they still open their cabin to the club for the annual "Trek" to the mountains and to "Venture" out and explore new trails. They love all types of trail riding including two-tracks, forest roads, rock crawling and even snow! Even though Bill & Nancy missed the first Sno*Blind in 1995 that have made everyone since then! They have also attended the Gitche Gumme run in Canada near Lake Superior and done the Spring Opener with the Trolls. In Illinois they visited the Cliffs Insane Park in addition to Haspin Acres and The Badlands in Indiana.

​Bill & Nancy organized our WOW (Wolverines Out West) trip in 2000 to Ouray Colorado. Bill had done some wheeling with his Bronco and armed with a guidebook he led the Wolverines around the mountains for 5 days. In 2002 the club returned to Ouray again with a larger group complete with event shirts and a large pot-luck dinner.  After a slight update to the trail guide in 2014 the club returned to Ouray with Bill & Nancy organizing the event. In 2017 Bill & Nancy led the effort for the WOW Moab trip which was a week-long event. With 13 vehicles and 29 attendees it was a large group, and all had a good time.  For 2020 the WOW trip was much smaller, but they enjoyed the trails around Estes Park and Rocky Mountain National Park. Bill led the group on a ride for day 2 on the event.

Bill is a past president of the club and between himself and Nancy have held every position in the club. Bill was honored in 1991 as the recipient of the Baldy Pohl award and Nancy was honored in 2017 for her contribution as well. Bill also was our web master for a couple of years and jumps in when needed still. Bill and Nancy are still current members even though they live in Tennessee now!

​Over the past 30 years there have been numerous 4-wheel drives in the family including Explorers, Expeditions, Excursions, Suburban's, Liberty's, XJ (Cherokee) Cj2A, CJ5, TJ, LJ and currently have a 4 door JK (JKUR) Rubicon. While the CJ2A was a fun vehicle according to Bill but having the JK's softer suspension makes trail riding more enjoyable.

Their current off-roader is a 2013 JK which is Gecko Green in color and has an AEV 4.5-inch dual sport lift which allows for the 37-inch BFG mud terrains to fit nicely. They also changed the gear ratio to 4:56 to maintain performance and highway speeds. The front of the Jeep has a stubby ACE Engineering bumper with the hoop to protect the Warn 8000# winch with synthetic rope and an integrated 12" LED light bar in the bumper. The front bumper's tabs are great for attaching D-rings or their Blue-Ox tow-bar for use behind the RV.  The rear bumper is a full size with integrated LED driving lamps for back up lights. The mount also includes a roto-pak can setup for an extra 5-gallons of gas and both a CB antenna and a ham (amateur radio) antenna. Underneath a full Rock-Hard skid plate system helps protect everything and the sway-bar motor was flipped to help increase the approach angle. The front tires are guided by a Steer-Smarts Yeti draglink, their tie rod, steering stabilizer and a trackbar relocation kit. On-board air is provided by Avair which is mounted to the brake booster. Speaking of brakes Bill has upgraded the factory one by replacing the entire brake system with DyanTracs big brake kit. Inside the cabin of the Jeep is a Rock-Hard roll cage which ties together the existing bars and new ones providing the added protection for those unplanned events.  There are more grab handles then cup holders with a last count of 12. There is plenty of safety gear (fire extinguisher, first-aid kit etc) in addition to numerous snatch blocks, tree savers, tow straps and a high-lift jack with a support base add to the must haves when four-wheeling.  Besides the built in GPS system they run ViewRanger on their iPad along with a DUAL XGS GPS transponder. Future mods include either a dash cam or a GoPro camera to capture all the trail action. 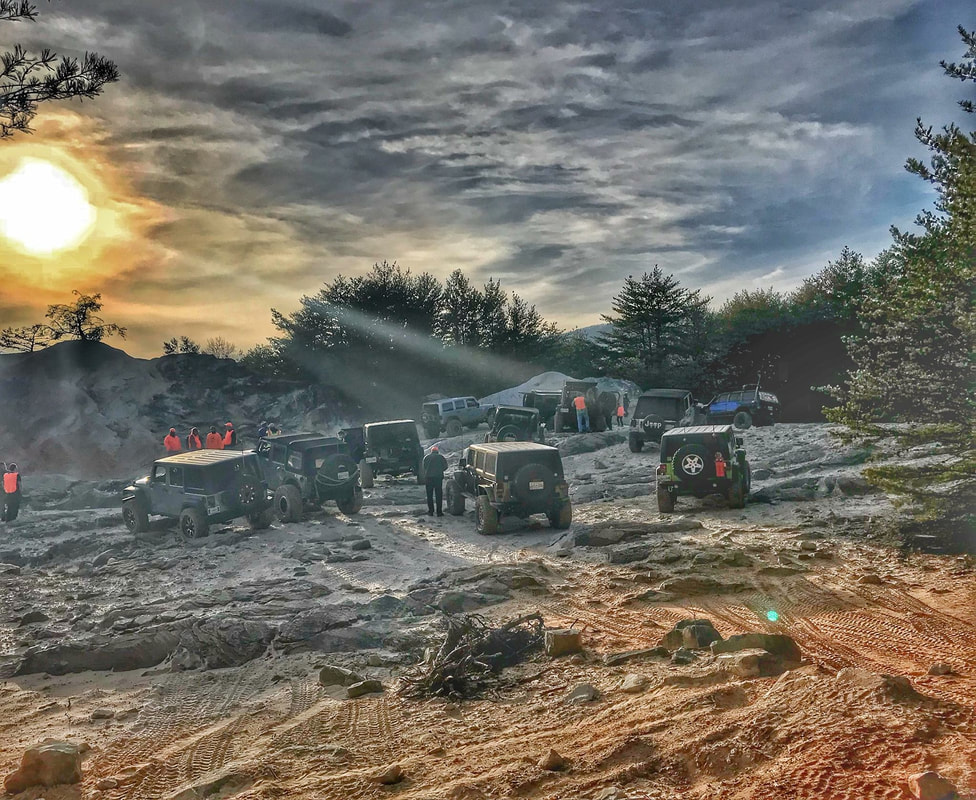 They grow up too quick but their memories will last a life time.