Jerry and Karen have two children; Brandon 23 who has completed a number certificates in the IT field and Kyra 21, who is working part-time at Michael’s and  a vet hospital while she is attending Macomb pursuing her Vet Tech certification.

They have always enjoyed the outdoors, camping, hiking, traveling and general sightseeing as a family. Now they are enjoying “Jeepin” to get to other places previously out of reach. Their first outing was  in June 2019 to the Mounds, where they quickly figured out that there is defiantly safety in numbers. After that they attended  Bundy Hills and the West Branch trail rides along with a couple of meetings. Jerry & Karen are looking forward to more events with the group, maybe even WOW next year.

Karen has been a stay at home Mom while the kids were home schooled since middle school age. She is now enjoying her new found freedom and taking up her life long ambition to become a writer. She currently has four books in the works in various stages of editing.

Jerry is an Engineer working for FCA for the last 33+ years, currently on the Pacifica program. In the past He has worked on the
Compass/Patriot programs where he got his feet wet into the Jeep world. Jerry was able to travel during development trips to Colorado, Utah, the UP and areas around southeast Michigan while working with members of Jeep Jamboree/Camp Jeep.

In the past they have owned an ’07 Liberty and currently a 2019 Compass Trailhawk (with the skidplate package) for Karen to get around in.

Their current trail rig (and daily driver) is a Gold 2004 Liberty Limited that they lovingly refer to as Dirty Blonde, no reference to Karen in any way!
They bought it used back in June of 2017 with 165k on the clock, still ticking with 183k+ now. It came with a cheap spacer kit for looks with the 245/75R16 Goodyear Duratrac’s on 16x8 steel wheels. They quickly found that while the inside and outside looked fantastic, the under carriage needed a lot of work and not just for off road use. Needless to say the only original part in the front is the swaybar and the rear trailing links in the rear. Thanks to many orders and $$’s from Rock Auto. To make it trail ready. The budget lift was replaced with an Old Man EMU spring and shock set up giving the Liberty almost a 3 inch lift and another almost inch with the tires. A full production skidplates was added thanks to U-Pull auto parts. Some modified  TJ Rock slides were added to help protect those pretty doors and sills. A CB was added and  the production radio swapped out for an Android based 6.5 inch touchscreen with built in GPS. It also has front and rear cameras and a 10 inch LED on the winch Hawse to help find it's way. To help get out of trouble Jerry designed and fabricated his own winch bumper to mount the Smittybuilt  10K with 85 ft. of synthetic rope. As part of the setup two shackle mounts inside the front rails and one hitch mount for the rear were also added. The part time transfer case fwas just swapped out for a “new to them” full time to help on those snowy days getting to work. They also have a trail kit on board with two straps, two snatch blocks, extra shackle and a portable air pump.

In the future Jerry and Karen are looking into adding to the trail kit and re-gearing to 4:10 and at least one limited slip and/or locker. The next fab project will be a roof basket for their Kayaks and Roto pax’s. 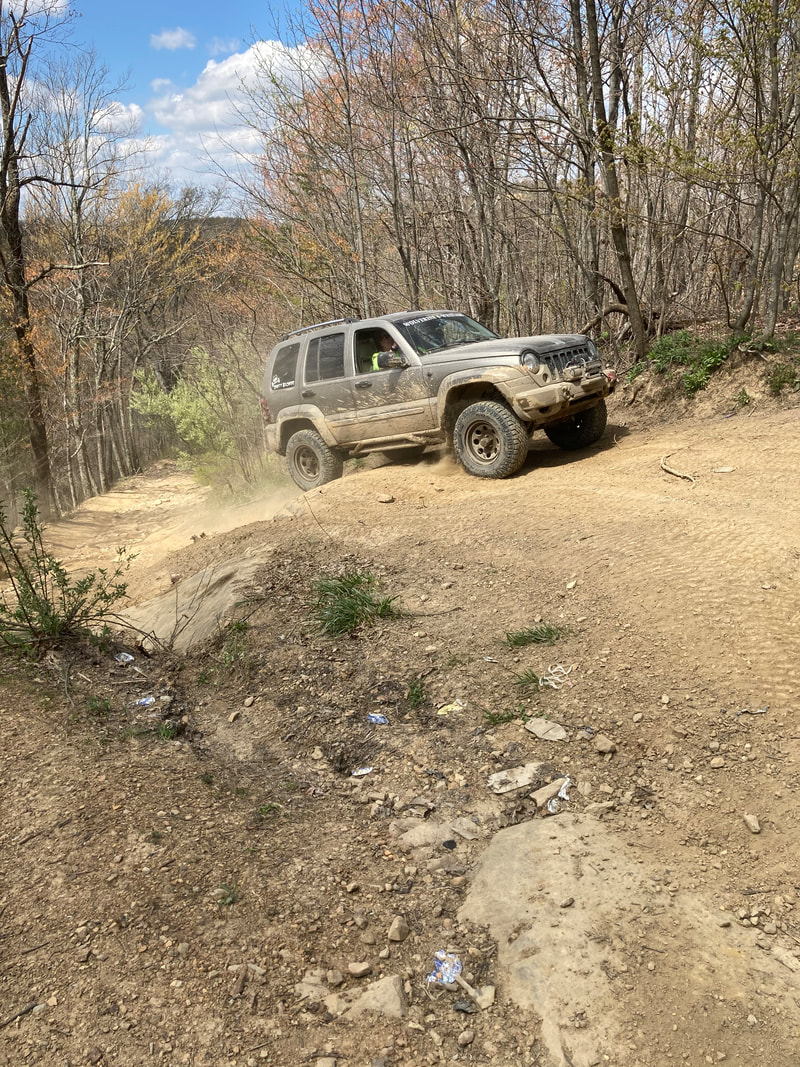